As part of setting up an Amateur Radio D-Star Compatible repeater, I needed a small PC dedicated to running only the repeater program 24/7, and I wanted something inexpensive that would consume very little power.  I settled on a mini ITX motherboard -- the Intel BOXD510MO with Atom processor -- with 1 GB ram, and an inexpensive Compact Flash card in a CF to SATA adapter for the PC's system drive.  CF cards have a limited lifetime of writes, typically only a few hundred thousand, which would be fine in camera service but an operating system could write to it many times a second.  So the goal is to have XP not do any writes to the system drive during normal operation.

The Atom processor and the 1GB of ram are more than sufficient for the task at hand, as long as a slim version of XP is installed and all unnecessary services are turned off.   This page documents how I did that.

Step 1 -- Starting with the Windows XP Installation disk, create a "slim" install disk.  I got the free nLite Windows XP install utility.  This is really powerful program that can "slipstream" various updates to the install disk.  For example, if you have an unused Windows XP Service Pack 2 install disk, you can download SP3 and nLite will slipstream that with your install disk to create a new Windows XP SP3 disk.  You can include any and all other patches, etc. if you need to.  But more importantly, nLite prompts you for services you may want to exclude, so that they won't be included in the resulting install disk.

Slimming Down Windows XP using nLite explains how to use nLite and suggests what to remove from the XP install.

Step 3 -- Turn off unnecessary services that managed to get installed in spite of nLite.  I followed the advice of Turn Off Unnecessary Windows XP Services.

At this point, the PC's disk-active light continued to blick once each second.  I installed the Microsoft SysInternals Process Monitor and set the filter to observe only disk i/o.  Turns out there was none. So I could have stopped there, but I really wanted to stop that disk light's blinking, otherwise if real i/o to the CF drive began to happen, I would not realize that.

The hardware triggers the LED both on hard disk i/o and CD/DVD drive i/o.  I tried but failed to turn off the "automatic notify" feature of XP that monitors whether a CD or DVD has been inserted by polling the drive once a second.  In my case, the CD drive was used only for the initial software install, so I simply removed the CD drive and the disk light stopped flashing.

Note: If I had really needed the CD drive to be permanently installed, I'd have gotten Microsoft PowerToys for Windows XP and used Tweak UI to turn off AutoPlay as described here.

Step 4 -- Installed the application.  This app can be configured to maintain a log of all its actions, as well as to record details if it encountered errors.  Turning on this feature resulted in disk i/o again.

Step 5 -- The solution: set up a persistent ram disk and place the application's working folder there.  I got a copy of VSuite Ramdisk (Free Edition) and created a 64 MB ramdisk.  (The target application is relatively small, and the daily logs typically grow to no more than 200 KB per day.  A monthly archive means this small disk is unlikely to fill up.)

I configured VSuite Ramdisk to save its contents to an image file (written to the CF drive) during system shutdown, and on system startup, it restores the contents of that ramdisk.  On the main VSuite Ramdisk window, click on the Ramdisk icon to the left, then the Properties button.  Click on the following boxes to turn on persistence. 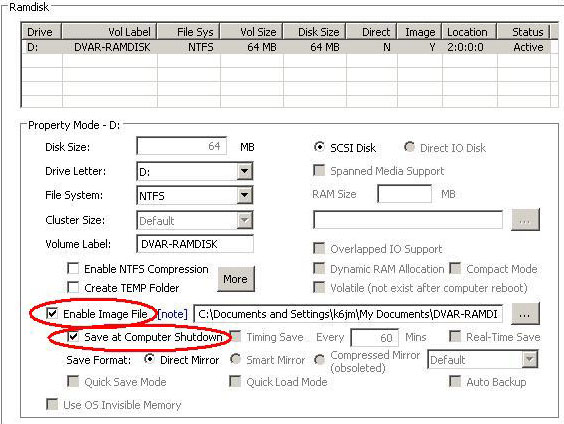 This allows me to run application logging to the ramdisk with no direct CF disk i/o during normal operations, and save the contents if I need to shut down Windows for maintenance.  The only risk is if the system crashes and I cannot save the log files from the ramdisk.  Since XP is extremely solid and just does not crash, and in this case the amateur radio application (DVAR Hot Spot) is also solid, I can live with the small risk.