If you choose to purchase a new radio for Hotspot service, the Alinco DR-x35MkIII series are a good value, but they will not work for Hotspot service "out of the box."  Fortunately, Hams have developed modifications that allow the radio to work in Hotspot service.  Two of these mods were provided to me by Ken KE2N.  There is also a link to different mod by Andreas DB0EAT.

Note: Be sure to get the T/E radio, not the FXE model.  The radio must have the DSUB-9 connector.  Don't buy the optional DV board.

The issue for GMSK-modulated D-Star is that a wide range of audio frequencies, including very low frequencies, are employed by the GMSK modulation method, so any filtering or processing of the receive or transmit audio must be avoided.  The RX audio should come directly from the discriminator with no audio processing or filtering, and the TX audio should go directly to the modulator with no filtering.

For most transceivers, when you configure for 9600 baud packet data, the above happens.  Not so with the Alinco DR-x35 Mk III.  These radios process and filter the transmit audio.

Ken KE2N, by email, has provided me with two mods for this radio. He did not write this to be used on a website, but many people have asked for this information.  I (K6JM) used the simple mod, and it works well.  I use this modifed Alinco radio all the time as my main Hotspot radio, but technically, a good service monitor might find fault with the waveform.  I cannot hear the difference.  Ken has also documented another mod if you want to improve the transmitted signal.

However, Ken has the following words of warning.  Alinco's design includes an optional digital voice board that is not compatible with D-STAR, and this influenced their RF design.  The radio uses a higher bit rate and wider bandwidth, for a given level of deviation, than D-STAR radios typically use.  Even with the best modification, the radio will not transmit an ideal waveform and may experience some bit rate errors for the slow data portion of the transmission.  He recommends doing the second of the mods described here, and to use a scope to adjust the pot, and that the deviation be set as low as possible.  A modified Alinco radio may work in Hotspot service, but it is less appropriate for repeater service.

This is easy, once you look at the photo. You cut the 9600 packet wire from the DB-9 and re-route it to the convenient “via” on the board.  To do this, just cut the orange wire that terminates on the 5th from left connector pin and solder it to the “via” or hole in the board as shown in the attached  photo.  I first soldered a bare wire into the hole, then soldered the orange wire to the bare wire. 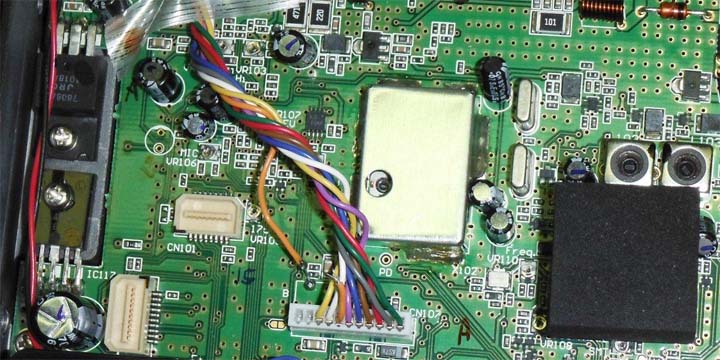 First do the simple mod.  (What follows was written by Ken)

Make sure the schematic you are working from is the MarkIII version – in this area it differs from previous versions     .

The next thing I did was to replace R111/R115 with a tiny 10-turn pot.  This let me adjust the amount of signal going to the VCO. Turning down that signal, and increasing the modulation slightly, the relative proportion of modulation going to the VCXO increases (up to a point anyway). By watching the recovered signal on a scope, I was able to adjust for a pretty reasonable waveform.  Too much going to the VCXO results in “ringing” at the leading edge and too little (which is the original problem) results in a seriously drooping trailing edge.

So - the two resistors shown below become a pot with the wiper arm at the junction point. 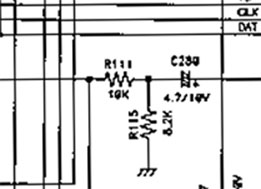 If you figure out an optimal value, you could probably use fixed resistors on all of the other radios.  It’s strange that the Alinco DV board works with this frequency response (assuming it does!)  Possibly their encoding uses some bit-stuffing technique that limits low frequencies to several hundred hertz (i.e. they fixed a hardware problem using software).

It must be there to wash out DC, so that you stay on frequency. I am not sure how to calculate the frequency response of this, but I note that 1/RC for C703 R704 looks like 5.5 Hz (or less if there is a 2*pi in the formula). So this should not be a problem unless the installed components differ from the schematic.  I think the VCXO they chose simply may not have enough frequency pulling range.  If it is one of these, then the normal range is 80 ppm or 1.6 kHz at 21 MHz.   The 5 volt version has a bigger range 100 ppm, but since they feed it from a zener in turn fed from 5 volts, they must be using the 3.3 volt version.If you are not worried about the low end, you can get plenty of deviation using the total of VCO and VCXO. In fact, my system shows plenty of deviation in the mid-range and tapers off going high or low. But it seems to work quite well.

This modification bypasses the audio path.  It uses a small audio coax cable with a DC blocking capacitor.  It disables use of the normal microphone, assuming the modified radio will be used exclusively in Hotspot service.

Follow this link, then scroll down to find this topic:
Some Information of how modifying the Alinco DR-135 MKIII for true 9K6 - usable for D-Star Repeaters

D-Star® is a registered trademark used for communication equipment (repeaters and transceivers) for amateur radio communications, and owned by Icom Incorporated.