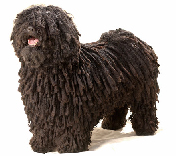 Barney did AKC Agility as a young guy, while he was waiting for his coat to grow to the ground and be competitive in the Conformation ring as a "Special" or Championship dog.  During this time, he learned agility and got his Novice, Open and Excellent titles.  But as his coat length grew, he began to knock down jump bars, and it was time to set that aside and focus on Conformation.

Five years later, when he retired from Conformation, Barney was looking for fun things to do on the weekend, so he began to run Agility again.  It had been 5 years since he'd last run, with no agility training during that time, but we entered him in the AKC "Preferred" class -- this is for dogs wanting to compete but who may be a bit older.  Preferred allows the dog to jump one jump-height lower (in Barney's case, instead of the standard 16" jumps, he can now jump bars only 12" off the ground).  Plus he's given an additional 5 seconds to complete the course.  We decided to run him only in Preferred Jumpers and skip Standard, since for older dogs Standard has the potential of injury when charging up the A-frame.

Barney remembered everything he'd learned, and he is really having fun.  He's gotten his Novice, Open and Excellent Jumpers Preferred titles in fairly short order.  He sparkles before we go in the ring, and he comes out really pumped.

The following videos show Barney having fun at about 10 years of age.  When finished viewing, close the window.